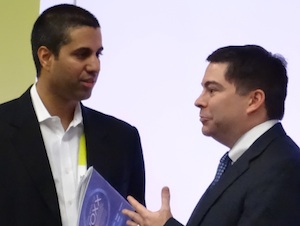 The latest plan to regulate broadband under common carrier rules is “a monumental shift toward government control of the Internet”, according to FCC commissioner Ajit Pai. On Friday, he released his rebuttal to chairman Tom Wheeler’s rosy summary of a thick – and still secret – proposal to impose stricter rules on how Internet service providers operate.

As a commissioner, Pai gets to see it now, before it’s voted on and released publicly at the end of the month. He’s limited in how much he can reveal at this point, but he can offer his opinions. As a republican appointee, Pai is also taking on the role of being the counter to the democrat-appointed majority on the commission. His brief press release is both a critique of the plan’s substance and a partisan counter to what is, in turn, a partisan proposal: there’s no indication of republican participation, let alone buy in, during its development.

It gives the FCC the power to micromanage virtually every aspect of how the Internet works. It’s an overreach that will let a Washington bureaucracy, and not the American people, decide the future of the online world. It’s no wonder that net neutrality proponents are already bragging that it will turn the FCC into the “Department of the Internet.” For that reason, if you like dealing with the IRS, you are going to love the President’s plan.

He also objects to what he says are billions of dollars in new taxes, monopoly-focused rules that will hinder investment and drive out independent ISPs and fatal legal flaws.

Without reading the proposal, it’s impossible to know who is sandbagging whom. But I think Pai is 100% right about one thing: the full text should be made public now, and not sometime after commissioners, as it nows appears, approve it on 26 February 2015 by a 3-2 party line vote.